Sleep apnea sounds scary and dramatic, and, indeed, it can lead to dangerous health issues. In fact, most of its sufferers are not even aware of this very common phenomenon. The estimates are that between 2 and 6 percent of the population suffer from sleep apnea. It is so common that in modern medicine up to five cases of sleep apnea per hour of sleep are considered normal. The problem begins when the frequency of events increases, and, in severe cases, it can reach hundreds of disruptions of breathing, some of which include apnea of more than ten seconds.

What is sleep apnea?

Sleep apnea is a temporary cessation of breathing during sleep. There are several possible causes of the phenomenon. In a small number of cases, termed central apnea, there is a problem with stimuli sent by the brain’s sleep center. However, the most common cause of the phenomenon is obstructive sleep apnea caused by the weakening of the swallowing muscles, which results in a drop of the base of the tongue and palate, which blocks the air passage to the lungs and creates a temporary cessation of breath that almost immediately creates a chain reaction. The level of oxygen in the blood drops and the sympathetic nervous system kicks in.

Diagram that describes the phenomenon – pay attention to the normal and abnormal state of the pharynx muscles:

The result for those suffering from the phenomenon is a kind of awakening that causes the removal of the obstruction and the renewal of breathing. This phenomenon is more common in men and increases in old age. When this occurs frequently, the result is in the first stage are simply chronic fatigue. In the second and longer stage, the consequences of sleep apnea are more dangerous, and the phenomenon is known to be a catalyst for heart disease, high blood pressure, and strokes. In addition, it affects daily life and can lead to problems such as anxiety and sexual dysfunction. 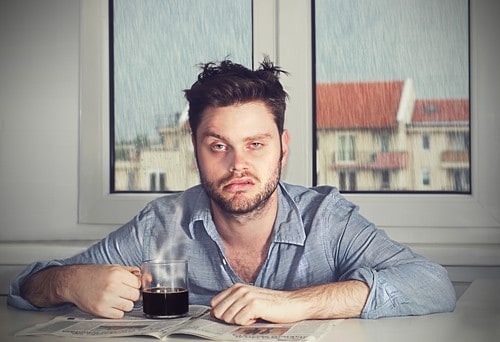 It is Important to Diagnose the Problem

As mentioned above, most of the people who suffer from the problem are not aware of it for many years in which their daily functioning is impaired and unexplained medical problems arise. The first stage in coping is diagnosis. What are the signs that will lead us to medical help? Unexplained chronic fatigue over days and weeks is one indication. In addition, people who suffer from sleep apnea tend to snore often during sleep (snoring is usually the result of a partial obstruction of the airways). It is important to note that not everyone who snores suffers from sleep apnea, but if a partner indicates the snoring has increased and at the same time chronic fatigue appears, it is recommended to seek medical advice.

The best way to diagnose the problem is through a visit to a sleep lab, for which you will need a referral from your family doctor or specialist. A sleep lab is a clinic designed to check for sleep disorders – in fact, it is a cozy room with a comfortable bed and what the patient has to do is simply sleep. The only difference is that in the sleep lab he is connected to monitors that monitor the course of his breathing and record every ‘breathing apnea’, when it appeared, and for how long the breathing was stopped. After a night in the sleep lab, the doctor will be able to obtain a more accurate picture, confirm or refute the suspicion of sleep apnea, and determine the level of the disorder (mild, moderate or severe).

Once the problem has been diagnosed, treatment can be started. Conventional medicine recognizes a number of therapeutic approaches to dealing with sleep apnea. Before choosing the treatment approach, you need to find out the reason for the blockage. Sometimes there is a distinct physiological reason for blockage such as a partition or polyps in the nasal cavity, enlarged tonsils, or a growth. In such cases, it is possible to surgically remove the obstruction and to normalize the airway.

The decision to opt for surgery is according to the specific diagnosis of each patient. In recent years, laparoscopic and robotic surgery has advanced greatly, and it offers innovative solutions, for example, a robotic procedure using an optic fiber, inserted through the patient’s nose that enables precise excision of enlarged tonsils, which greatly reduces tissue damage.

Despite advances in surgical techniques, surgery is always an invasive procedure involving tissue trauma and requires a relatively long recovery period (especially surgery in a sensitive area such as the oral cavity). In addition, every surgical procedure carries with it the possibility of complications, so doctors often do not rush to offer surgical intervention before attempting less invasive and aggressive procedures.

Sometimes when there is no obvious physiological finding of obstruction, sleep apnea is attributed to another underlying disease: For example, diabetes or obesity. In such cases, the best remedy is a change in lifestyle, with an emphasis on better nutrition. Many times after a person has lost weight or stabilized blood sugar levels, sleep apnea will also greatly diminish and sometimes go away entirely.

The disadvantage of this approach is that weight reduction is not always an easy task and it requires a fundamental change in lifestyle. This requires mental strength that is not always available when the need arises and it can be a long process. The advantage of the approach is that it deals with the problem and does not focus only on the symptoms. Of course, weight loss has a wide range of health benefits that far exceed the phenomenon of sleep apnea.

Other treatments can offer significant relief to sleep apnea sufferers, as described below.

The jaw support is a dental device that attacks the problem in a very simple way. The rationale for the device is almost primitive. It is a plastic device that pushes forward the lower jaw, which in turn pulls the base of the tongue with it, leaving the airway open. Although since the beginning of the twentieth century experiments have been made with similar devices, only recently the medical community has come to accept them as part of a broad treatment method. This is a case of cooperation between researchers in the field of general medicine and researchers in the field of dentistry. Although the device has nothing to do with dental health, dentists’ knowledge of oral anatomy and their experience in developing dental appliances has greatly helped develop this device.

Today, more and more doctors are seeing both the jaw support device and the CPAP as a worthy substitute for surgical intervention. Its use is relatively simple and in many cases it does the job well, despite the fact that it is intended to treat only the symptoms and not the root of the problem.

CPAP is an acronym for Continuous Positive Airway Pressure or, in simpler terms, air passage with continuous positive pressure. For decades, this device has been at the forefront of the fight against sleep apnea and is today the most effective and available solution that modern medicine offers to sufferers. The CPAP is not intended to treat the source of the problem but to ensure free passage of air to prevent the blockage that leads to sleep apnea. In this sense, the rationale for the CPAP device is not that different from that of the jaw supporting device, but the way it achieves this goal is much more sophisticated.

The CPAP sends air through a mask to the respiratory system and produces constant air pressure that keeps the airways open and thus prevents sleep apnea. Although the device is very effective, it requires a period of adjustment from the patient – the mask and tube that propels air through the nose may make it difficult to use the CPAP and some patients cannot adjust. Even in light of these issues, for most people who suffer from sleep apnea, CPAP is today the fastest and most immediate solution modern medicine can offer.

It is worth noting that there are many different types of devices on the market, and the new generation of devices is much more convenient and user friendly, and in some of them you can even control features such as humidity level or air temperature.

Where can you get a CPAP device?

Because of the variety of models and the sensitivity of each patient, it is best to check with your healthcare professional before purchasing a device. It is important to note that the price gap between the devices is large and can range from several hundred shekels for a simple model to more than five thousand shekels for one with more features. Some health funds provide a refund or subsidy, so it is important to contact them to check the terms and conditions (type of device or supplier) before purchasing. Yad Sarah also provides a wide variety of CPAP devices, and you are invited to consult with our representatives and receive pertinent information.